Okay, I thought they were cool, and clearly my older brother’s girl loved hers (on the left) because when we saw her a couple of days later, she had it stuffed full of stuff and held onto it. 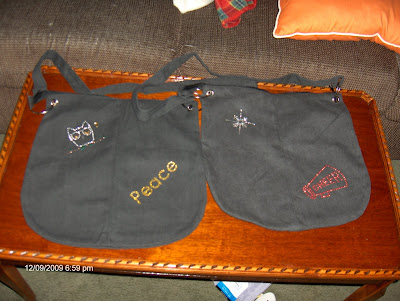 I really luurve (that’s super duper love) the owl sticky, we got it at Michael’s, and really wanted to keep it for myself, but owls are all the rage this coming year in kid’s stuff, so I let it go. Maybe she’ll be ahead of the curve. The other is a cheerleader and the school colors are black and red, so it worked out perfectly.

Anyway, some  of the decs. were iron on and some were sticky, and we got the bags at W**Mart.  Because the material was so thick, and we were using thick towels to cover to protect the delicateness of the crystals, it took longer than it said for the iron-on, but overall, very easy to do and if you have a tween/teen to make a gift for, I highly recommend trying this. Bonus points for filling it with cool hair stuff, bath and body, etc. or adding it to a gift basket of such stuff.