If you’ve read this blog pretty consistently, you may have realized that Keeley and I have been donating a lot of time to the Angel Tree Program. A LOT of time. That’s why I’ve been so absent.  On the 23rd, I went back and helped build from scratch several kids’ packages, as well as wrapping some that were the last to get out the door to the families. I was there until 10 pm. We donated the time in honor of our church members, families, and everyone who has given so much to us, and to  Keeley in the last year. I thought it might be fun to share what we got ‘our’ angel, Julia. I got a chance to meet and talk to her during the party LAST Friday night, she has pretty blond curls, that were a mess and only got messier when her twin older brothers used balloons to static electrify it! She was very quiet, but smiled really big when she was playing. It was nice to get her some new items, as the ones she was wearing looked pretty worn out. She is 4 1/2 by the way. (Please ignore that our house is a mess in the background!) 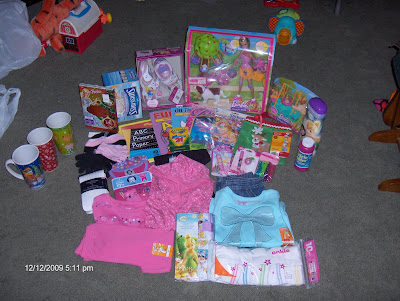 It’s kind of hard to see, but there’s a 2 pk of pajamas, 3 outfits, socks, underwear, tights, light up princess shoes, Barbie doggie park and additional puppies/bathtub for it, Tinkerbell bubble bath, some bubbles for her to blow, a little felt bag with several lip glosses, barrettes, bandaids with Snoopy on them, a writing pad and some crayons and coloring books, stickers, a hat and gloves, and a Holiday Barbie movie. Since we knew she had 2 older siblings, we got 3 mugs for hot chocolate and a large box of hot chocolate packets with extra marshmallows (who doesn’t like extra marshmallows?) and wrapped it for the family. Someone had taken the whole family’s angels earlier and gotten them electric toothbrushes, a set of pjs and a sweatsuit, I think. The program already had a coat for her. She ought to be all set for the winter, at least. Oh and her favorite color is pink. I think we did her justice!