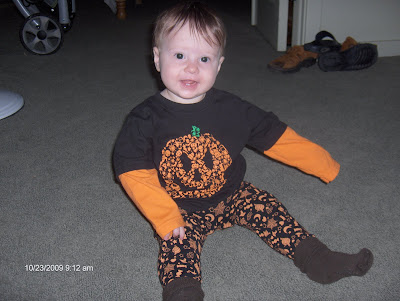 SCROLL DOWN FOR FUN MONDAY!

One of Keeley’s favorite things to do now after a nursing session or waking up from a nap is to STRETCH! She arches her back until she’s approximately in a C shape. She also did this several times while waiting to get her vaccinations. I think we were big entertainment in the health department. It’s a word she recognizes and can follow through on. You just have to be careful that she doesn’t stretch when you’re not ready!

Another stretchy thing is that she’s grown out of her pumpkin seat. The doctor remeasured her (the nurse said 29.5 inches, DR says 31 inches), I’m glad he pays enough attention to remeasure. Now if he would have reweighed her too, but of course it’s a digital scale, so not much point, I suppose. Baby girl lost weight. Which means, of course, that not only is she out of her pumpkin seat, but she is not legally allowed to be in her big girl seat, either (20 lb requirement), so…not sure what to do about that. So far we’re just letting her be in the big seat, as she probably weighs 20 lbs with clothes on.  We considered buying another seat, but we’re putting it off until January, by which time she will be 20 lbs (I hope!) and they go on sale. Crossing fingers that stores still do baby sales in January!

On the other hand, her clothes are all a mess. 18 months seems to be the way to go for her chest/head circumference/shirt length. The pants depend on the brand! Some of the 12 month pants seem just fine, and other things it seems like 18 month or even 24 would be better (like for leggings, which seems to be the only thing they sell for girls anywhere).  She received some cozy footed pjs for her birthday in 18 and 24 month. We found a few more feeted pjs and got them in 18 month so she’d have a week’s worth to wear (they were on sale). She’s nowhere near out of them, but I’m already looking ahead to spring and summer and wondering if we shouldn’t put non-feeted pajamas on her Christmas list in a bigger size.  I already bought a ton of summer stuff of regular clothing for her, when they were on sale in August on DEEP discount, so that would round out her wardrobe nicely, I think. The alternative is toys and I have no idea what to do with the toys she already has. Do we take the chewy type toys away and just let her have the big kid toys? I just don’t know. I do know that if she goes on a destructive tear that we wouldn’t be able to walk through the living room. I still think we’ve only purchased 2 toys for her, total. She just got a lot of  ‘car seat’ toys that she likes to chew on, and they’re still laying around, I don’t quite know what to do now that she’s stretching her limits on toys too (ha! I got stretch in again!)… Any thoughts about baby toys and Christmas ideas and car seat or weight issues would be appreciated!