On Saturday we went to the alma mater’s Homecoming Parade. We met up with good friends Michelle and Jamie and had a good time watching Keeley watch the parade. She got a string of mardi gras beads, a can cozy, a couple of pieces of candy and a mini football (on Sunday she took a bite out of said football).

Later we went and visited with my friend Stacy’s in-laws, as they live in town, and dropped off the clothes she lent us, as well as the wind up swing, which Keeley napped in a time or two or fifty when she was tiny. As they visit her in-laws often, I’m sure they’ll have them back and wonder how to store them in no time!

After the parade, Keeley got her first birthday gifts from Michelle and Jamie. Talk about shocked. In general, I haven’t given gifts to my friends’ kids at their birthday, but I have, without fail, sent a card to each of them. They don’t’ have kids so I guess I won’t have to worry about handling that issue, as of yet. I know that no one gives a gift in expecting that they’ll get something in return, but it kind of seems like that tends to be the case. I guess we’ll cross that bridge when we get there. Her presents were a little blue fuzzy outfit, which should be cozy warm, a shape sorter that if I’m not mistaken, you turn the tail on an elephant and he shoots the shapes back out his trunk, and a little bears football (she knows Matthew all too well!), and I say her and she because I’m pretty positive Michelle does the shopping. Anyway, after that we got back to the car and I nursed the poor animal (5 hours!) and we got to our favorite pizza place, Aurelios. I took a couple of pictures on my phone, but we don’t have the cable to take them off, so not sure what to do about that. They were really good shots, too. Keeley had a cup of diced peaches and nibbled on some misc. pizza stuff. Back to campus for a walk, some photos of the old stomping grounds, including Rocky the bulldog, and a visit to the bookstore. Matthew got a hat, Keeley got a shirt, and I got nothing. I was trying on female shaped sweatshirts, you know the kind that suck in so you actually have a waist, and someone snapped up the last XL. Yup, even at a size 8 I have to have an XL because of the mammoth mammories and repeated abdominal surgeries which have left me flabby. Maybe I will consider that as a possible Christmas present, so I’ll have something to wear next year for the parade. I wore a pretty shapeless sweatshirt this time. We did actually get a ‘family photo. 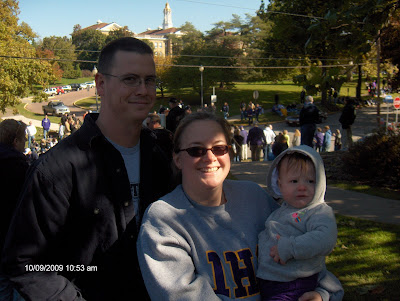