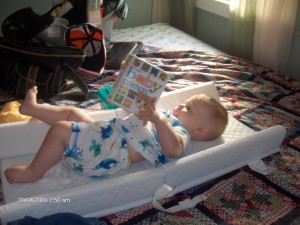 We’re practicing for potty training already. Ha! This is a 10 month picture, but as I wanted to post and our 11 month pictures won’t be taken until this PM, this is the one you get! After several weeks of struggling with keeping Keeley on the changing table, I moved her over to the guest bed for diaper changes. Almost immediately the issues went away. Once we supplied a book, toy, or asked her to help by pulling out a wipe (yucky, don’t eat it!), it helped a lot. We had tried giving her toys on the changing table, but I guess she was trying to say she’d outgrown it! Occasionally she still turns around on me, but for the most part, at least she’s on something soft, and here we go with a fine example of what the beginning of a diaper change might look like. Although by the end, she’s usually dropped the book, after having chewed on it. The changing table now holds diapers, toys, and we may move books over soon as well. At least a few of them. For the next couple of weeks I won’t be doing much bending, so she’ll have some limitations on toy and book usage while it’s just the 2 of us at home, otherwise it will be a hazard.

11 months, though, kind of hard to believe. However, she’s crawling, pulling up, standing and letting go for a couple of seconds, able to get back down to what she pulled up to (new this week!) and also babbling a lot more (new this week!).  She’s showing a lot more interest in books (one  hand me down needs a cover  glued already, although since they’ve been through a minimum of 4 kids, I’m not surprised), and notices things like the air conditioner kicking off, and squeals at the blue light over on the wall (temperature panel). She’s observing more, eating more, and all in all, just growing up. Matt seems to not be taking it as well as me, I guess with the surgery I kind of have to take it all in stride. I can’t be worried about things like that! I have to enjoy every minute and little new thing she does! I fully have, too, then again I’m home all day. I keep most of the ‘new’ stuff to myself and let her daddy see them unaided on his own. He’s pointed out stuff to me a few times as well that I didn’t notice (like getting down from pulling up), so it’s pretty interesting.

Well enough rambling, let you get back to juicier things!