Janet is hosting this week: Hollywood has come calling. They want to make a movie of your life story! So here’s what I want to write about: Write the brief synopsis of this film that you might use to pitch this project and cast the principal players. Who would play you? You can either cast or ignore significant others, children and/or pets. This is, after all, YOUR movie about you you YOU! Illustrate as needed with casting photos or filming locations. Your life not interesting enough? Hey, this is Hollywood. Never let the facts get in the way of a good story!
A film about my life would have me being played by Jennifer Love Hewitt (you know any other normal looking twentysomething brown eyed brunettes with big bo0bs and a big but#?) Nope, didnt think so. Oh yes this would be a starry eyed romantic comedy where a couple learns to love each other through thick and thin, good times and bad, and learns to laugh at their problems and focus on their lives as whimsical fun times. What, it’s my movie! As for my husband, I had to go trolling through some photos because how can you cast a good looking guy who has the duality of working on his own trucks and programming software while capturing that aww shucks quality on the side? Then it hit me, the perfect one: Jerry O’Connell. Come on, can’t you see her handing him wrenches to work on an old truck and him stuffing down his rowdier side to sit in a cubicle, but still making people laugh? Oh and she’d make fabulous money doing something that allows her to volunteer and such on the side. What? it’s my movie! It doesnt have to be based on fact. 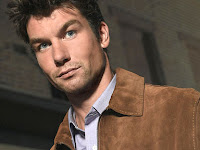 Oh and to my hubby, my dear, you can play alongside JLH when I can play across from JO’C. Deal? Ha! My hubby thought he’d actually get to be cast in the movie with JLH. No way!