Angela wants to know: So continuing in the spirit of “being interested in people”, I would like to know, or see, what’s on, in or under your bedside table! So open those drawers and bare your soul to us! Is there anything special there that has a story or a memory that you can tell us about? Books that you keep there to delve into from time to time? Trinkets that you don’t know where else to put? Let’s see! Note, this is NOT for those under 18, k?

Okay, here’s the deal, I did peek at other people’s blogs, and I know there’s no way I’m the most ‘out there’ or ‘naughty’ — no way. So where do YOU keep this stuff?!? When we lived in other places, this stuff lived with other movies or was in the dresser. We had sheets or clothes in the nightstand beforehand. We had to, we had no space. So, the bottom drawer has nighties in it (now, I had no clue this was empty until this morning, I put my jeans which were squished into one drawer in the dresser, into two and moved these to the nightstand before I took the pic). 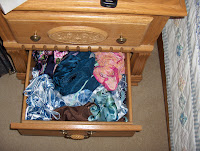 The top drawer has movies, cards and other things for bedroom activities. Oh and a flashlight. Why does the power ALWAYS go out at night? Now you’ve seen my naughty bits! 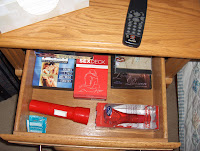 Oh and just for something of minor interest, here’s the decorations of the nightstand and of the dresser. The nightstands were scratch and dent, so we got them at least half price if not more, and they were a good enough match (forgive the lighting they really ARE the same color) for them to ‘go together’. They are solid oak. 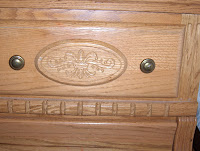 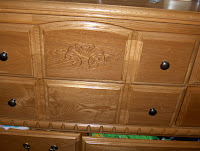