Hmm, this was a VERY inexpensive craft. If I were to guess, I would say so far less than $2 for 6 pieces so far, with the chance of making 6 additional from the same material. The only thing I haven’t purchased is the rick rack. I bought 3 pieces of felt, for 20 cents each. I already had a needle and red thread, a piece of sewing chalk, a good pair of scissors and some superglue. If you had to buy a needle and thread, a piece of sewing chalk and superglue, your total would be $5, if you have them, I would say you could make these 6 for about 40 cents, with material left over. The scissors were from my grandmother. I have no idea how much sewing scissors cost. Regular scissors might make a slower go of it, but then again, it would be in investement if you plan to do any other crafting. And honestly, it didnt take that long to do this craft. I had a pattern already, as I had an old one that needs much tender care because his mane is all broken and his felt is holey, not holy felt. Holey felt. I imagine you could print out my picture, make it larger, and cut out the “felt” from my picture to make your own template. I traced and cut out the patterns one evening in a few minutes and slowly put the rest together while watching tv yesterday afternoon. If you did it all in one shot or had help, it would take a couple of hours. By the way, the candy cane is not “straight” compared to the pattern. The hobby horse has a bent head like he’s pulling on the reins, so the cane is technically straight and will hang straight, but the horse will look bent forward. That’s the way it’s supposed to be. 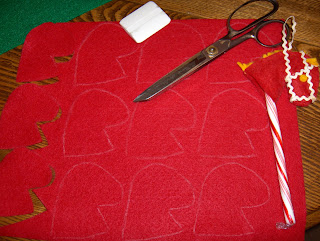 First of all, I used my old template to trace with white sewing chalk one pattern, and cut it out, then used it to make the rest of the patterns, as you will see, my horses are bit fatter than the original, due to tracing around the outside with the mane still attached, etc. 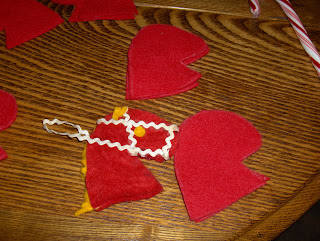 You can see the comparison here. They are slightly bigger. Don’t worry if your patterns dont all look exactly alike, just try and match up the ones that are closest, at the end you can trim off anything that is grossly extraneous. Use your horse head and cut out a “mane” in a coordinating color felt. It should hit near the top of the head. Don’t worry about your coordinating color, it doesnt take that much for each piece. Just enough to have a mane sticking out as well as some inside to be sewn together. Maybe a half an inch wide. 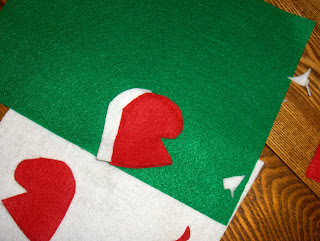 Layer your white piece on the inside of two red pieces. Then I took a regular sewing needle and used a red piece of thread to sew the three pieces together. I’m sure you’re familiar with knotting your thread at the end so that it doesnt pull through the fabric. I trim off the excess so that the knot is at the very end, and what I did was pull the needle and thread through ONLY the bottom of the white piece and all the way through the top red piece. This hides the knot between the white piece and the bottom red piece. Then I go all the way through all the pieces stitching backward once so that bottom stitch is solid. I started at the bottom of the mane and worked up to the nose, around to where the nose hits the jaw and tied off there and trimmed the excess. I went halfway through the top piece and hid the knot inside again. If you want, you can double stitch back around the nose and then back again (so really triple stitch) or do a chain stitch like in embroidery so you have a tighter hold around the nose. The first time, my horse’s “nose” the candy cane poked right through. So far, with the double/triple or chain stitches, it is holding just fine. 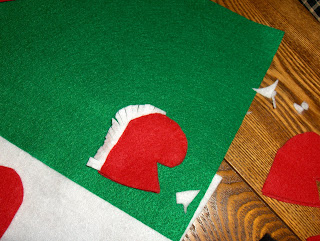 Then you take your super sharp scissors and make small cuts in the mane to give it texture. It really is as simple as that. 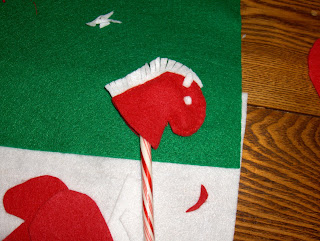 Then of course I used superglue and glued on the “accessories.” The ears could be pointy or rounded, it’s not really important, as long as you think it looks like a horse ear. And you can put it wherever you want. If you do plan on putting on the rick rack for reins though, you may want to position it in such a way that it wont be in the way (see the first and second pictures for examples.) For the eyes, you could use a hole punch to “mark” the felt to cut around (i tried punching but it was too thick of material) and that works pretty well or you could cut an almond shape as well. If you do have punch of any shape that will go through, I think that would be fine. If you plan on using the rick rack, you can glue it on as well.

I think these make really easy and inexpensive gifts, or package tie ons that can be used as ornaments for years to come. I still need to get something for the loops and get those affixed and they’ll be ready to hang on the tree!