Janet from The Planet of Janet, wants to know…Describe your meeting with your spouse/significant other. I especially want to hear “meet cute” stories. And it doesn’t have to be your actual current sig/other. Perhaps the “meet cute” story is a former boy/girlfriend… or even a best friend. Illustrate with photos, of course. So go check out the other participants when you’re done being disgusted by my sickly sweet story.

My hubby and I met in high school. Well, I would say we officially met in high school, even though we went to the same grade school too. We had PE class together. We did the kind of but not really dating thing that 14 year olds do. Then he moved to another school. I graduated and went to college. He went into the military. When we were both older and wiser, we started chatting online. I started it. We still have the e-mail to prove it. So I got what I wanted, I guess. 🙂 I e-mailed a mutual friend and asked if “MS” on his e-mail forwarding list was the same guy we went to school with, knowing full well that it had to be. Having thought he had a good sense of humor, and had an elfin cuteness, I started it! We emailed and chatted every once in a while after that. We met up once in Dec. of 98 when he was home on leave in between his schooling for the military. We had a mutual interest and hung out for a couple of minutes. More chatting and email ensued. It was all very half-flirty, half cool interest. What are you doing. How’s class, etc. At one point, he flat out said he wanted to see me in August when he was on leave again. I took it as a silly thing, just hang out. True to his word, HE CALLED ME! I couldn’t believe it. We went on our first date. To see “sixth sense”–I don’t like scary movies. I put my hand on his leg and squeezed when I was scared-which was a lot. To my surprise, we both enjoyed that. A couple of days later he called and we watched “inspector gadget 2”–if not for the one dad and kid in the theater, we probably would have made out in the movie theater. Instead, he took me out to the lake dock and we looked at the water, talked, etc. When we were walking back to the car, he stopped me and kissed me. I was kind of surprised. I was ready for the second. That was much nicer. We sat in his car and talked ravenously until 5 a.m. No kidding. Really talked. and a (very little) more. My parents said they’d wished I’d waited another hour to come home. The coffee would have woken them up instead of me. Later that week we went to a bigger town to try and find a part for his dad’s mower. Just an excuse to hang out, again. On the way back, we stopped at this stand of evergreen trees and just talked about the past, the future. He tearfully said he’d never wanted anyone else (oh he’s going to be so mad at me) –that was so special. I still smile inside when I see those trees. We have been heart-fully together ever since. Distance, oh yes, distance and work and school have separated us. But we have always come back together in the end. He’s my first and only lover. Times are crazy, they have been hard, they’ve also been good. We’re the kind that might be frustrated, but we sit and make a plan. “We get through it, we always do” is said very often around here-he says the first part–I say the second. We make a great team. 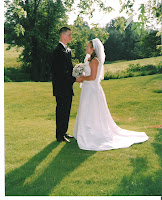