We’ve been working on the workbooks. All the live long day. We’ve been working on the workbooks just to pass our grade levels to-day! Seriously. I’m so done with this and I think the kids are too. We only worked on them a bit at the beginning of the year with spelling words and then now towards the end (I seriously can’t believe it!) we are playing catch up. I need a better balance between workbooks and unit studies. We go whole–heartedly into the unit studies and forget to go through our basic skills in the workbooks. Bah!

The younger one tracked weather for a week, worked on short and long vowel sounds, and the differences in sentences. She wrapped up double digit subtraction workbook pages with the result being color by number quilt blocks. That was super popular. Some other focuses were on things like rhyming, sequencing, classifying, being a part of a community and science pages.

The older one peeked into various noun and verb forms, graphs, charts, angles, and finally, fractions! She was SO excited and of course, after several prior baking and cooking lessons, it came naturally. Her other items were things like the constitution, information about states, and so on.

This week my younger one read a ton of PIG books, her favorite animal. The older one delved into the ‘Inkheart’ books. I think their eyes bled they read so much, but they loved every minute! They are both reading well above grade level and we’re done with Book-It for the year, and they MORE than met their quota! The good thing is, it motivates them to at least meet their goal, but it certainly doesn’t slow them down when there’s no pizza to ‘win!’

Over the weekend we made a meal for a church family who has been struggling to care for an ill family member. The kids decorated cards to go with that. The kids went to a Lego building event at a nearby library and the older one went to another event at a different one. Diversification is everything, right? I finally got around to ordering books for our next unit study. On Monday I got to go OUT of the house on my own! Yeah! I went and did charity work, but it was good to get out anyway. It’s nice to contribute outside the house. I called about appointments and prescriptions, too. I also played a TON of peek-a-boo. See photos, for my contribution to cute in the world. 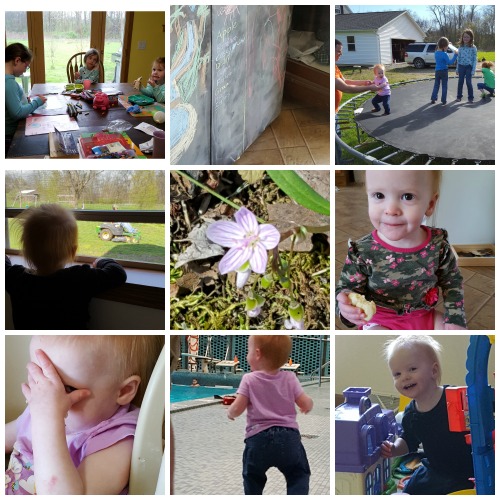 If there was a week theme it would have been check off the list. Like the kids workbooks, I had put WAY too many things off. The kids even got multiple baths after their multiple swim lessons. Be impressed, people, be very impressed. The kids climbed trees (and gave me a rash when I came to the rescue), I walked around taking spring wildflower pictures, and in general tried to soak up some sun while my husband did the first big mows of the season. Also a neighbor dropped off a set of trampolines. I don’t know how to feel about that yet. The kids wrote a bunch of stories and played with the new-ish chalkboard painted cabinet doors again. I did more laundry than I care to admit, and we weren’t even behind, we just have that much. The house was tidy by Friday.