This winter, though mild, has still annoyed me quite a bit–too much time cooped up with a kid that does not want to be cooped up. There are some pretty ‘bright’ things going on, though.

Keeley has quite the imagination. I kid you not, the other day, she put her hand to her head, southern belle style and said ‘I’m so ANGRY mommy, in that movie, the guy dies’.. apparently she’d been rummaging through and found a movie we’d seen ONCE. I’m not even sure anyone dies in it, but it made her ANGRY. 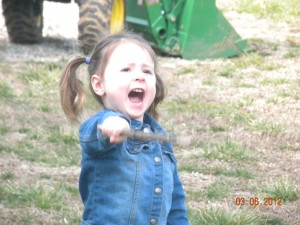 angry at the wind and telling it to go away!

Matthew bought her some boots (a few sizes too large) so she’s using them indoors for playing cowgirl. Clomp, clomp, clomp. She gets out her hat, but not her stick horse. Interesting. This probably has a lot to do with toy story Jessie.

She’s using her little kitchen a lot more for cooking–we moved the set away from Brennan’s wall, and so it faces the real kitchen while cooking, I guess that makes a difference. She makes a wide variety of foods (pear and carrot salad for example). Things go in the oven for ‘sixty minutes on hot’. That’s over in a flash, you know! Her concept of time or what things get cooked is not really good yet. She’s learning, though.

Lately she’s been using big words-I seem to recall when we had some people over a few years ago, their kids were 3, still had their binkies full time, and rarely talked at all. She’s so many miles away from that. Chatterbox that mimics SO much. Even the ‘mama bear’ behavior of ‘do NOT wake up my babies!’… at her after school club. Nice. Wonder what that makes the teachers think?

One of her other favorite pretends is playing princess/fairy/anything–I’m sure she gets most of this from the PBS shows, like Super Why that have a princess as a regular character. At least she’s a good speller, so maybe that will rub off on her?

As the weather warms up, there’s more time outside, and particularly ‘planting’ a metal pinwheel flower over and over again– it’s a good excuse to play in the mud. There’s also a lot of screaming that happens whilst outside. No idea why, just to hear the echo? This is fine with me, she does a good job of staying out front (at least right now) where I can see her, she doesn’t seem to need to wander off too much, she’d like to just sit and dig in the dirt, or stand on top of the mulch pile and make shadows, etc. 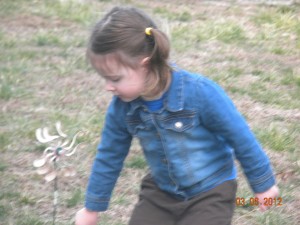 Last but not least, at least her hygiene is improving–covering her mouth with her elbow when she coughs, and cleaning up after #1’s, including proper hand washing at the sink-when reminded of all the steps. I’m not sure when other people do this, if it’s normally incorporated into pottying earlier on, but she snuck onto the toilet without a step stool one day (still with an extra lid) and I thought, you know, if she can do that, she can balance enough to wipe her own tush. Hopefully she can progress to cleaning up #2’s soon. A completely toilet independent kid would be awesome.