This week we took insects and invertebrates a bit further and talked specifically about bees and arachnids. Who isn’t a bit afraid of these creatures? After reading a bit about worms and slugs, picking up the life cycle of butterflies and ladybugs, and delving into various books about insects in general, it was time to hit some hard topics. I wanted to see if we could have a little less fear in the end. See our Resources for more info on our papers and here’s our books used, too!

Monday we focused on bees! They watched the Magic School Bus Gets Ants in Its Pants and The Magic School Bus In a Beehive. The kids used bubble wrap to make honeycomb shapes with paint and later added fun bee details. We also finished using a bug kit that had a giant dragonfly puzzle in it. We had listened to the CD’s during our first insect week. They had their last ‘club’ meeting of the year and got trophies. In the evening we read a bunch of spider story books after taking up some of the papers we were working on 2 weeks ago during the day. 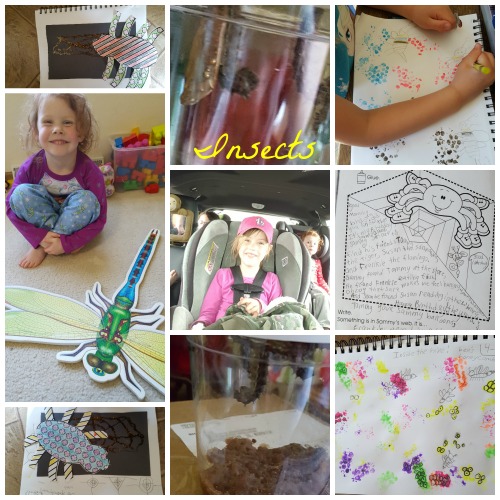 Tuesday we read Spiders by Gail Gibbons and another book, which both explained how webs are made. I got some info about a home school group that had started meeting and we took some social/PE time for a few hours that morning! They had no idea how many home schooled kids were in the area! They watched some more Magic School Bus and Sci Girls on Monarch Butterflies. Swimming for the middle 2 was that night while I caught up on chores.

Wednesday they used glitter glue to make webs, made some paper spiders, and did some pages on spiders that created a book. We watched the Magic School Bus Spins a Web. Then we headed for a late story time at the library. Thursday they finished up some bee pages, and delved into their workbooks for math (older) and language (younger) to finish out the week. They watched some Sci Girls on PBS, too. We had swimming (middles), a church meeting for me called at the last minute, and softball meeting for the older one. It was a busy night.

Weekend Events
…and of course once again we had an exciting weekend, which should be noted. Saturday we headed in for the Great Cloth Diaper Change 2017, which you can read more about HERE. Sunday the kids sang the prelude and after church the kids and I went to the nursing home where they sang and paraded through to give the residents a little uplift in spirits. Brings a mom to tears!