The first half of the M States are what we focused on this week: Maine, Maryland, Massachusetts and Michigan! The kids drew lighthouse pictures for Maine and Dr. Seuss pictures for Massachusetts! I played ‘The Downeaster Alexa’ and ‘The Lighthouse’s Tale’ for them, we talked about accents, diversity of cities, and the American Flag. They did a 100 grid with the flag, too as well as focusing on their normal math.

We listened to several renditions of the National Anthem and compared them to other nations’ anthems, citing that ‘America the Beautiful’ was more like theirs. We broke down the anthem line by line, discussing what it meant and then talked about the current controversy over kneeling for the anthem. This led to talking about the Great Migration and slavery a little bit. They’re probably the best informed small town pasty kids ever. Their world will be immensely different from ours.

We talked about kids in the public school district that needed food over the weekends and took them to buy the items that were requested of our church. We bought 4 times what was requested since many other families are on fixed income, too. They took turns putting the items in the shopping cart. It’s not much. It was about $20 for the 4 sets of foodstuffs. We need 40 sets.

I really did not feel well this week. Some sort of cold bug, I guess, it’s still hanging in there and annoying me. I still pulled through and taught classes and managed to get my hair cut, which is some sort of miracle! Everyone spent a lot of time reading or watching TV if mom really felt bad, and since some of them were sniffly, too, in bed. They still did all their main subjects, we just went lighter on things like art.

Everyone really seemed to learn something this week. The 2 year old is continuously wanting to help in the kitchen-see the flour on her nose? We also discovered her pj’s are glow in the dark! Also the baby started to crawl! Which means I spent the last half of my week moving things everyone else left out and shoving the last of the choking hazard toys to higher places. Tons of fun. We’re having the big kids joint family birthday party this weekend, too. 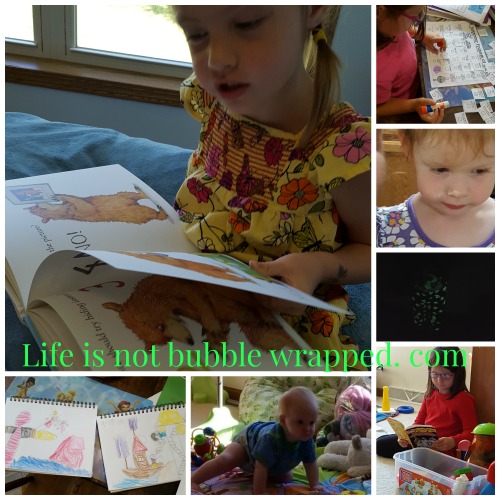 I finally insisted that my 7 yo finish the September math calendar I printed out for her. That was a lot of fun (for me). Until I took the picture (above) and thought about blogging about it, it didn’t occur to her–because she was doing the problems in random order- that since it was a calendar it really ought to go in order by date. I got a good laugh out of that. What I did was print out both the lower grade and upper grade calendars, cut apart the younger grade one (mostly addition) and had her solve those, and we worked through the upper grade one at random and glue the younger calendar to the advanced one as she made a match. She learned a lot of new math terms (perimeter, area) as well has how to add fractions, ways to simplify a multiplication problem into long form addition so you can solve it, and got a good review of counting by certain numbers. I may look for those another time! Resource below!

September Math Problem of the Day Calendar Freebie from Math Geek Mama
Scrambled States of America BOARD GAME! I can’t recommend this enough!
Name that state flash cards  from Teachers pay teachers, Kindergarten Princess
First 2 pages of ‘mystery19’ from Build A Bundle sale mystery package this year.  It features state ‘fact’ info and a bit of history.
Topical Books in particular we’re reading the info out of THIS ONE that shows topography and THIS ONE that shows fun facts.
Books the kids are reading on their own, see their Good Reads Lists: K-1st / 2nd-3rd